The news that mini camps could happen at some point in June was a welcome boost to a sports fan craving any crumb of positivity in this COVID-19 world that we are currently living in. As the world gradually gets back onto its feet sports teams are going to have to find ways to adapt to any new restrictions placed upon them. It’s hard to imagine how the NFL will look with social distancing measures potentially in place, particularly in the trenches.

The off season usually provides crucial learning time for squads, a chance for newbies to blend in and chemistry to develop amongst positional groups. It may look different this time around but let’s take a look at 3 teams that really need this off season more than others in my opinion.

There are obvious challenges for any new head coach in a “regular” off season. Having anything but a “regular” off season could not have come at a worse time for the Carolina Panthers. If you look in the dictionary for the definition of a rebuild, then this is well and truly it. Not just a new head coach, but a new quarterback, new systems to implement on both sides of the ball, and the first ever rookie draft class in NFL history exclusively on the defensive side of the ball to blend in. 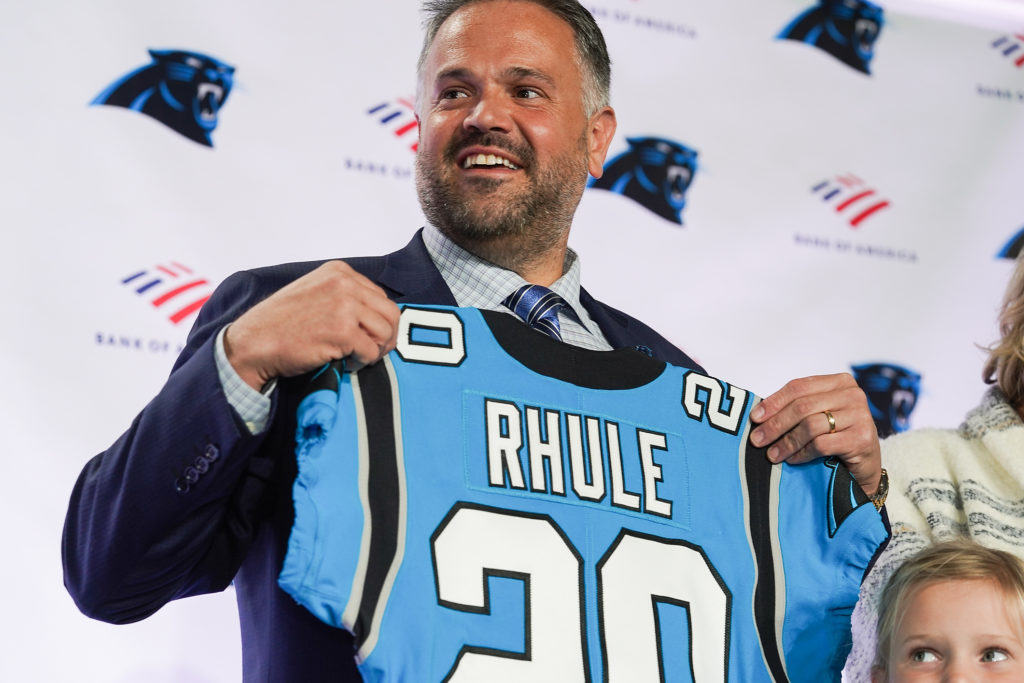 The defense was horrible last year surrendering 52 total touchdowns. This was only outdone by the Miami Dolphins who gave up 54 but showed fight and improvement down the stretch. An area of particular weakness was in the run game where they surrendered a league high 5.16 yards per carry and a whopping 31 touchdowns! It’s understandable with statistics like that they chose Derrick Brown with the 7th overall pick to shore up the middle of the defensive line.

Teddy Bridgewater is the man chosen to replace Cam Newton following his 6 game cameo for the Saints last year. In those 6 games he threw for an average of just 228 yards per game but crucially limited turnovers with just 2 INT’s from his 205 throws. Having seen Kyle Allen melt down into a turnover machine after a promising start to life in 2019 this should be a welcome relief for Panthers fans. Bridgewater did of course have Michael Thomas as a true #1 receiver in New Orleans. This generated a target rate of over 31% during Teddy’s run at the controls. Iit will be interesting to see where the football is distributed in an offence that saw fewer catches from its top 2 wideouts combined last year compared to what Thomas put up.

Luke Kuechley was in on 143 tackles last season and has been the leader of the defence for some time, but he has sadly retired. Greg Olsen may not be the force that he once was but he has moved on to Seattle. The trend? Leadership presence has left the building for one reason or another. The Panthers are a young team, with a young head coach and possibly needed this off season more than most. It will be a tough road ahead for Matt Rhule and company to field a successful product in 2020. At least they have Christian McCaffery!

He may well be the greatest of all time but even Tom Brady surely needs some time to acclimatise to a new environment. For the 1st time in 20 years TB12 will not have Bill Belichick on the practice field when training camp roles around. I still find that quite weird to type but it will very quickly become reality so I best get used to it. It probably feels like repeating the narrative, but surely father time will have his say at some point?

Brady had a down year last year dropping a full 5% off of his 2018 completion percentage. For a man renowned for his accuracy, that’s a worrying drop. Outside of James White and Julian Edleman he struggled last year to make any connections. In fact when looking at the target breakdown of said duo it’s quite startling just how much he relied on them.

<5 yards of line of scrimmage 52% of all targets

That chemistry has been built up over a period of time and will not be immediately replaced. You can certainly point to the fact that Mike Evans and Chris Godwin are better receivers but practice makes perfect and the Bucs will hope to be able to get plenty of it in for this superstar offence to gel. The signing of Rob Gronkowski after a 12 month “retirement” as much as anything offers Tom a comfort blanket.

The Bucs were in lots of close games last year so you feel the obvious likely regression in turnovers may be enough on its own to make the difference between 7-9 and the playoffs. The gunslinger mentality of Jameis Winston has been replaced with effectively the polar opposite. Brady has thrown less INT’s since 2016 than Jameis did last season alone, in fact his career INT rate of 2.8% is exactly half of the man he is replacing over nearly 4 times as many passing attempts.

Brady obviously wins from the pocket so affording him time will be key. Being able to snag Tristan Wirfs in the draft was an ideal scenario for the Bucs. Moving up to get him shows the Bucs are all in for the next 2 years and for that reason alone they can’t afford to have any time wasted. 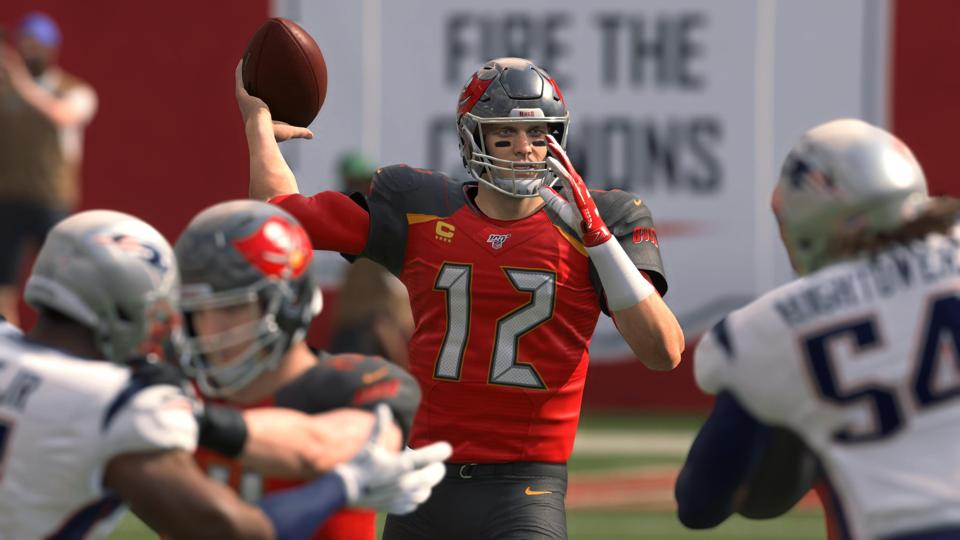 High scoring, explosive, entertaining and innovative, ladies and gents the 2018 LA Rams. As for 2019, erm not quite so much. A franchise that suffered the superbowl hangover fate the same as many have done before will be looking to rebound in 2020. Sean McVay has rang the changes at the coordinator positions with Kevin O’Connell and Brandon Staley being brought in. Will this be the key to unlock some of that McVay magic that was all of the rage in the 2019 off season?

Player wise the rams are a different team to the one that went so close to superbowl glory just 15 months ago. This off season, Brandin Cooks has been traded (again), Todd Gurley and Clay Matthews have been released. There is the impending talk of a Jalen Ramsey holdout which will add further headaches although, it’s not as though character issues weren’t apparent before the trade however. But enough about who has and who might be going, let’s look at the players that will be suiting up.

Backfield by committee, Daryl Henderson and rookie Cam Akers. Steady if not spectacular, although I have heard many people say they think Akers could become special. Out wide Cooper Kupp and Robert Woods. Again steady, not 2 names that jump into top 5 wide receiver conversation but certainly a nice pairing. At tight end Tyler Higbee emerged over the last 5 weeks of 2019 averaging 104.4 yards per game over that stretch. So the rams do have some pieces to work with, but of course it’s all eyes on Jared Goff.

The off season started for Goff with a restructure of his contract which actually makes it more difficult for the Rams to move on from him down the line. So that’s obviously the good news, the bad news however is that he is regressing. His touchdowns were down to 22 from 30 the year before and his interceptions were up to 16 from 12 the year before. There have been rumblings of discontent from the fanbase and the pressure will be cranked up more with a shiny new building to play in.

Defensively the Rams have lots of money tied up in both Aaron Donald and Jalen Ramsey so will be looking to their superstars to carry a defence without the stewardship of Wade Phillips. Nickel Robey-Coleman is a loss as the 3rd corner but for a unit that generated 50 sacks last year ranked 4th in the league, they will look for Terrel Lewis out of Alabama to stay injury free and add his unique blend of size and athleticism to add playmaking ability in the front 7. A big year ahead in LA can’t start soon enough.

That’s 3 teams from my perspective but who have I glaringly missed off the list? Do you think Brady will fit in just fine? Let us know @full10yards